Will America's "Improved Dialogue with Islam" Include the Matter of Persecuted Christians? 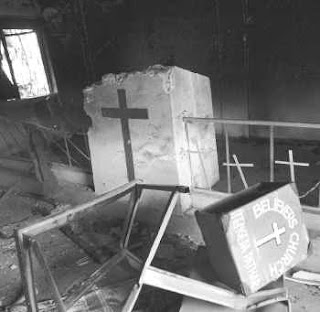 Doug Bandow has an excellent article (Interfaith Dialogue: The Great Unmentionable) over at The American Spectator that is well-directed and full of facts. I print just a bit of it below.

President Barack Obama has called for an improved dialogue with Islam and is planning a major speech in Egypt. He is not alone in his efforts to reach out. Pope Benedict recently visited Jordan, where he acknowledged "the burden of our common history so often marked by misunderstanding."

Certainly all faiths would benefit from greater understanding. Yet no conversation will have any meaning if it does not address Islam's brutal reality: the consistent persecution of Christians, Jews, and members of other minority faiths...

Nevertheless, past Western dialogue with Islam has consistently missed the elephant in the room: Pervasive religious persecution.

Who persecutes religious minorities around the world? Communist and former communist states are big offenders: China, Cuba, Vietnam, and North Korea. There's a motley mixed group, including India, Sri Lanka, and Burma. Then there are Islamic states.

In fact, it is unusual to find an Islamic nation where religious minorities are not discriminated against, both legally and socially. One of the best predictors that a government persecutes, or fails to protect religious minorities from persecution, is that the majority faith is Islam.

Obviously, there is a range within the Islamic world. Some of persecutors, such as Eritrea and the Central Asian countries, for instance, seem driven more by ideology than theology. Moreover, not all Islamic states imprison or kill dissenters. But even the good isn't very good...

Obviously the president cannot center U.S. foreign policy on the issue of religious liberty. But the freedoms of conscience and of religious faith are basic human rights, the promotion of which is an important objective of American policy. Moreover, no genuine dialogue with the Islamic world can overlook the Muslim record on religious persecution. If Islamic governments expect the Western states "to take all possible measures to promote tolerance and respect for all religions and beliefs," then the former need to do so as well. And that means protecting the liberty of those who believe and worship differently in their own countries.

By all means, let's encourage dialogue with Muslim nations. But let's put all issues on the table, including religious persecution.
Posted by DH at 8:24 AM