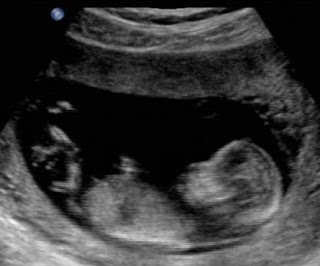 Here's good news on Nebraska's Ultrasound bill which we've kept you informed about. The update comes from Nebraska Right to Life.

LB 675, the Mother's Right to See Her Unborn Child Ultrasound bill, passed from second stage debate (Select File) on the legislative floor to Final Reading on a 38 to 6 vote on Wednesday, May 20th. The bill passed from first round (General File) to Select on May 14th. A handful of opponents to LB 675 kept the debate going for five hours on General File and four hours on Select by throwing up several amendments. The intent and substance of LB 675 remains intact even with some tinkering on the floor. The crux of the bill is that the abortion facility doing ultrasound must perform the ultrasound one hour prior to the abortion and display the ultrasound screen so the mother can choose to look at the image, or not look at the image.

The displaying of the screen aspect of the bill is what has Planned Parenthood upset as they say currently they "offer" the mother the "option to view" her ultrasound. With the display screen being turned towards her she can truly choose to avail herself of that information or to not avail herself of it. But at least she has the opportunity to view the screen which typically is off to her side, near her shoulder.

Here is the final vote to move LB 675 to Final Reading and passage: The Final Reading vote should come in the last week of the session, next week. Special thanks are due to Senator Tony Fulton, LD #29, the introducer of the bill and floor debate leader. Senator Beau McCoy, the prioritizer of the bill, was unable to be present due to a death in his family.