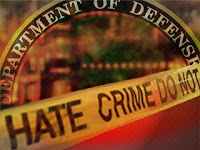 Look out, boyo; here it comes.

The House Judiciary Committee is expected today to pass Local Law Enforcement Hate Crimes Prevention Act of 2009 which will add to the list of "federally protected classes" sexual orientation and gender identity .

The law, promised quick passage through Congress and an immediate signing by President Obama, will allow the federal government to intervene in state and local legal matters when crimes "motivated by race, ethnicity, religion and sexual orientation" are committed. It also allows the federal government to prosecute the crimes in addition to the local jurisdiction and with stiffer penalties. So much for double indemnity.

Proponents of the bill include homosexual Barney Frank, the Democrat from Massachusetts whose own scandalous behavior in the past (paying for sex, using the powers of his office illegally to fix 33 parking tickets for a homosexual prostitute who he then hired as an aide, intervening with letters on congressional stationary in behalf of said prostitute who was in trouble with his Virginia probation officers, having his own apartment used in a homosexual prostitution ring) hasn't embarassed him in the least. Frank said of this new legislation effort, “The law already increases penalties for crimes motivated by hatred in several categories, so the absence of protection for gay, lesbian, bisexual, and transgender people is particularly egregious.”

...But several religious liberties groups oppose the measure, saying it is unnecessary and would limit free speech and potentially leave religious figures that speak against homosexuality open to prosecution.

“Violent crime is already illegal and there are already penalties available – a gradient of penalties based on severity,” said Matt Barber, director of cultural policy for Liberty Counsel, a religious rights organization.“What’s more,” he said, “every American currently, regardless of their sexual preference, is guaranteed the same equal protection under the law.”

What hate-crimes laws do, Barber said, is “take the focus off the crime itself and instead puts the focus on the opinion of the alleged perpetrator. It becomes a thought crime and not a hate crime,” he told CNSNews.com.

Thanks to hate-crimes laws in Canada and in the European Union, Christian groups have already become targets for hate-speech prosecution, Barber pointed out. “Hate-crimes legislation (in other countries), which is basically identical to the proposed U.S. legislation for all intensive purposes, has turned out to be the precursor to even more oppressive hate-speech legislation, which directly squashes any opposition to the homosexual lifestyle or even affirmatively promoting traditional sexual morality,” he added.

Andrea Lafferty, executive director of the Traditional Values Coalition, agreed, saying the legal framework that the bill establishes will virtually guarantee the eventual prosecution of religious leaders who speak against homosexuality. “H.R. 1913 broadly defines ‘intimidation,’” Lafferty said. “A pastor’s sermon could be considered ‘hate speech’ under this legislation if heard by an individual who then acts aggressively against persons based on any sexual orientation. The pastor could be prosecuted for ‘conspiracy to commit a hate crime.’ ”

Lafferty told CNSNews.com that during committee markup of identical legislation in 2007, one of the bill’s cosponsors, Rep. Artur Davis (D-Ala.), admitted that the hate-crime legislation would not exempt a pastor from prosecution in that scenario...
Posted by DH at 11:01 AM