Muslims Urged to Pilgramage to Jerusalem, Demonstrate That It Is a Muslim City 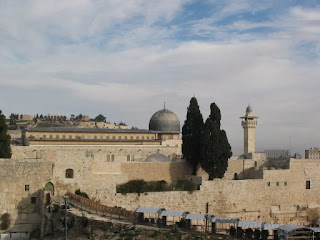 Egypt's Minister of Religious Endowments Mohammed Hamdi Zaqzouq urges Muslims to go on a pilgrimage to Jerusalem (by the hundreds of thousands) to demonstrate that it is a Muslim city and the future capital of a Palestinian state.

"Just as Muslims go on pilgrimage...to Mecca, they should also go to Jerusalem and to the Al-Aksa Mosque by the hundreds of thousands every year. If this proposition is followed through, the whole world, and Israel, will have to accept this reality, which is that Jerusalem is for Muslims and they will not give up on it."
Posted by DH at 11:00 AM