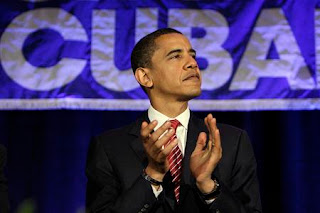 Humberto Fontova, the author of Exposing the Real Che Guevara and other books, gives you the facts about traveling to Cuba that the MSM has conveniently ignored. In so doing, he reveals yet another angle of how Fidel Castro is deftly "playing" Barack Obama.

Well, I guess one hopes Obama is being snookered.

The other scenario (i.e. that an American president whose political philosophy was steeped in anti-American socialism is willingly enabling this vapid but vicious regime) is a whole lot scarier.
Posted by DH at 9:43 AM