Abortionists Will Have a Friend Running Obama's Health Department 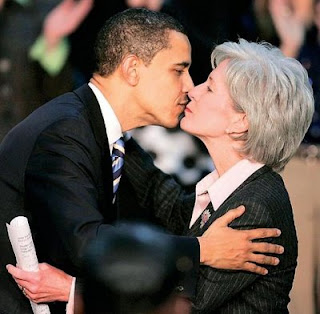 Despite her inexperience, her hypocrisy, her inappropriate financial relationship with an abortionist, and her lies to lawmakers about the money she has received from said abortionist, Kathleen Sebelius appears poised to become our nation's Secretary of Health and Human Services.

To such depths has our republic descended.

Michael Steele, the Republican National Committee Chairman, decided he'd better say something about the matter -- awfully late in the game, Mike -- and, sure enough, this Associated Press report is much more negative of Steele than it is of Sebelius.

Indeed, the press has given Sebelius a free ride. But, in this case, the liberal media has had plenty of help from the Republicans themselves. Sebelius skated through her Finance Committee confirmation hearing earlier this month without a single Republican Senator (several who boast about being pro-life) even once bringing up the issue of abortion.

The AP reporter, Erica Werner, writes, "Republicans had some cover on the issue because Sebelius was supported by both her home-state GOP senators, including Sen. Sam Brownback, a strong abortion opponent."

Warner also reports that "opposition from anti-abortion activists — and pressure on Republican senators — has grown" since those hearings. That's not really correct. The opposition from pro-life activists has been there from the start. In fact, the opposition to Sebelius' cosy relationship with late-term abortionist George Tiller and her shameful apostasy as a pro-abortion "Catholic" was quite strong long before Obama gave her the nod.

Sebelius, like so many other other pseudo-Catholic politicians, insists she is personally opposed to abortion. And yet she has a lengthy record of striking down every pro-life measure that comes her way, even those that simply look out for the health and safety and informed consent of women.

Sebelius is so confidently pro-abortion that just last Thursday, even while her nomination was still in question, she coldly vetoed a measure that would have required Kansas abortionists (like her pal George Tiller) to provide information pertinent to the patient's rights when late-term abortions were performed. Sebelius said such a law might lead to "intimidation" of abortionists.

We certainly can't have that, can we?

And this...ahem...lady is going to be our next HHS chief?

I repeat -- to such depths has our republic descended.
Posted by DH at 8:55 AM