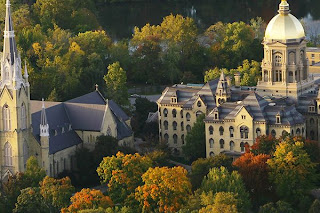 The flap over Notre Dame's invitation to Barack Obama is growing, but it is primarily fueled by alumni and a few conservative student organizations. A survey of the current student body shows that most of them are in favor of the President's speaking at their graduation ceremony.

That the alumni generally disapprove of their school giving this distinct honor to Obama is an indication that a Catholic education once meant something at the university. After all, the Roman Catholic Church teaches that abortion is a mortal sin, a particularly despicable act of wickedness. Yet Barack Obama is a champion of child murder. He has vigorously supported abortion in his public career and, in his young presidency, he has already exported abortion overseas using American taxpayer's money and declared open season on human embryos for experimentation.

But to this young crop of Notre Dame students, abortion is no big deal.

More important, according to the dim bulbs quoted in this A.P. report, are such matters as: courtesy (yet what kind of manners does it take to dismember a child in his mother's womb?); "putting aside" the President's heinous promotion of immorality so that the school has a nice graduation event; pride in the fact that Notre Dame is but one of three university's Obama will be speaking to this spring; and this convoluted reasoning from (surprise, surprise) a political science major from the Chicago area -- "To not allow someone here because of their beliefs seems a little hypocritical and contradictory to what the mission of the university and church should be." Huh? So that's the Catholic mission nowadays? To hold no moral absolutes, no discernment, no spiritual convictions whatsoever?

E. Michael Jones published a book back in 1989 which asked Is Notre Dame Still Catholic? The university's invitation to a contemptible pro-abort like Barack Obama (and its support by the student body) has certainly settled that question.
Posted by DH at 9:04 AM