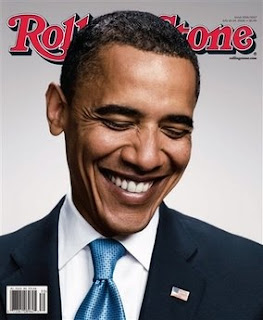 James Lewis has an excellent article over at American Thinker in which he reviews Team Obama's weird response to the host of crises facing America ("inappropriate giggling"), their brazen exploitation of those same crises in behalf of a socialist power grab, and what action must be taken now by conservatives to stop this madness.

Is it conceivable that a president would want matters to get worse?

Lincoln did not pray for a Civil War to befall the country to make him look good; just the opposite. Washington and the Founders did not want the Revolutionary War. FDR did not actually want to worsen the Great Depression, though he ended up doing just that according to some economic historians.

To be sure, New Deal Democrats deliberately parlayed economic crisis into political opportunities. FDR's sidekick Harry Hopkins never stopped trying to "Tax and tax, spend and spend, elect and elect." The Hopkins formula kept the Democrats in control of Congress for forty years, and now they are trying it again with a trillion-dollar Harry Hopkins Memorial Act. Even European socialists are aghast at our gluttonous Democrats.

Needless to say, the Hopkins formula led to decades of stupid and destructive social policies, devastating Black families that had managed to stay together during the worst years of Dixiecrat oppression in the South, corroding our inner city schools, popularizing abortion and divorce, rationalizing hedonism and drugs, undermining the work ethic, setting women against men, the poor against the rich, illegals against citizens, and phony liberal pacifists against American national security. The Left sprinkles poison seeds wherever it goes -- which is why even Vladimir Putin (!!) just advised us not take the Marxist road to ruin, like Russia did. Imagine that...
Posted by DH at 10:31 AM