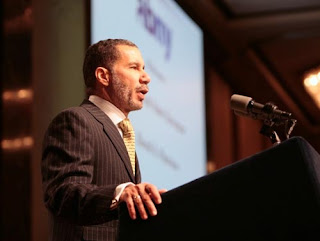 In the summer of 2005, then New York Senate minority leader David Paterson commissioned a thorough review of the Democratic conference and its staff. Paterson's lack of efficiency had already become an issue and, gearing up for an effort to take back the Senate, Paterson figured he'd better find out where things needed fixing. He appointed his close buddy, Malcolm Smith, the State Senator from Queens, to lead the study.

"Uh Oh Number One" -- The report showed things were even worse than what Paterson feared. And remember, it was an inside job. Smith had Meredith Henderson, Paterson's own director of human resources, conduct the interviews of Paterson staff members -- from his closest aides all the way down to office functionaries and research assistants. And the picture emerging from those interviews -- well, it wasn't pretty.

As Elizabeth Benjamin reports in the New York Daily News,

The report reveals an operation beset by infighting, larded with patronage hires and lacking any clear direction or vision from the top...

"Leader Paterson has a restaurant maitre d' style of management - whatever the members want," Jonathan Rosen, then a top staffer for Senate Democrats, told a Paterson aide who was tapped to interview staffers and compile their opinions.

"Paterson is afraid of the conference; leads by consensus," the report says Rosen believed at the time. "This is a huge liability."

One top aide who should have been imposing discipline instead boozed with subordinates and came to work hung over, one employee griped.

A politically connected hire had only one job: to make sure drawers were stocked with copier paper, another revealed.

Aides were promised the report would be kept confidential.

"Uh Oh Number Two" -- For all the good it did him, Paterson never should have commissioned the report. At any rate, he certainly ignored the advice it represented. As Benjamin suggests, the report revealed Paterson's office was "mired in chaos, lacking clear lines of communication and hobbled by dysfunction and indecisiveness" and yet it stands as "a devastating early look at the bumbling management style that would come to define Paterson's first year as governor."

"Uh Oh Number Three" -- The "confidential report" wasn't buried deep enough. A copy was obtained by the Daily News which made a very revealing, very embarrassing page one story out of it this morning. And it couldn't have come at a worse time. A new Siena College poll (Yes, they do more than play basketball up there.) puts Governor Paterson's approval rating at 19%.
Posted by DH at 12:09 PM