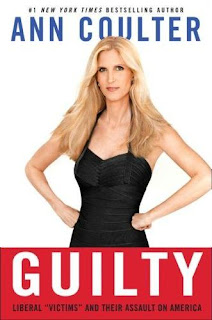 Last night a few of us (Allen and Cindy, Matt, John and Barb, Quint, Chet, Claire and I) gathered in our living room for coffee, cookies and a lively discussion of Ann Coulter's book, Guilty. It was the latest in our ongoing Book It! discussions organized by Vital Signs Ministries.

The book is a tour de force, a rich mix of documented evidence, persuasive argument and Coulter's rhetorical skill -- all marshaled against modern liberals and their various masquerades.

We recommend it highly. And we recommend it especially for those whose view of Ann Coulter comes more from reading the MSM's standard scripts about her than from actually reading her stuff.

After all, liberals want their conservatives apologetic and timidly back-pedaling. (Like Michael Steele, Orin Hatch and way too many Republicans.) So when they run into a conservative who possesses firm (and well-founded) convictions, they despise them, deride them and then dismiss them.

But when they run into such a conservative as Ann Coulter -- that is, a conservative who is also witty, engaging and telegenic (not to mention, well-informed, well-written and well- spoken), they know the game is up. And, at all costs, they must keep her message from being fairly heard.

Ann Coulter's Guilty is, no doubt, humorous and satirical and bold. Those are good things, not bad. But Guilty isn't conservative entertainment. Except for her performances on TV (where she's usually fighting for her life against entrenched opponents), I think Coulter is closer to Bill Buckley and Bill Bennett than she is Rush Limbaugh or Dennis Miller. And Guilty is a case in point. Her arguments are rich in intellectual depth and detail. She's consistent, stays on point and presents an amazing amount of documentation.