And the Piper Will Be Paid 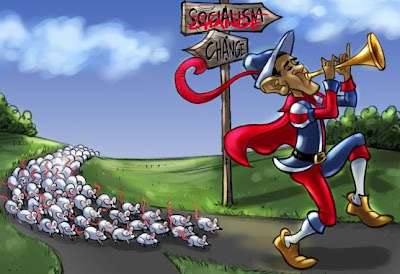 For those who may not know the legend which gives this illustration its bite -- The Westphalian town of Hamelin was once infested with rats. Well, naturally, the people looked to government to solve their problem. Who wouldn't? So the townfolk went to the Mayor. But His Honor and the city council couldn't figure out what to do.

But then the mysterious Pied Piper came to town. (The word "pied", by the way, refers to the musician's brightly colored clothes.) The strange musician offered to get rid of the rats for a hefty fee. The politicians were a bit skeptical but they took him up on his offer anyway. And they promised the stranger the money if and when he accomplished the deed.

Well, it worked. The Pied Piper played a magical tune. The rats were entranced and followed him...even when he led them into the river where they all drowned.

However, once the deed was done, the Mayor refused to pay up. (Imagine, politicians breaking their promises! Although, in their defense, perhaps they just ran out of money after squandering it on pork projects, wasteful spending and the silly shenanigans of a nanny state.)

Anyhow, on the next St. John’s Day, the disgruntled Pied Piper returned and played a different tune. This time it was the children of Hamelin who were entranced and ran after him. The Pied Piper led them all into a mountain cave. And they were never seen again.

Because, of course, the town council "hadn't paid the piper."

A very sad story, huh? Although, given Barack Obama's radical promotion of abortion...perhaps he wouldn't see it as a tragic story at all.

Anyhow, to extend your musings of the Pied Piper legend as a metaphor particularly "tuned" for our time, you might read through Robert Browning's poem describing the affair or the lyrics of the Benny Andersson/Bjorn Ulvaeus song, The Piper, from Abba's Super Trouper album back in 1980. (You can even listen to it here.)
Posted by DH at 9:42 AM