Is Barack Obama Providing the "Tipping Point" on Abortion? 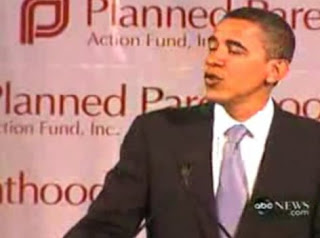 ...President Obama may very well be supplying an "overreach" moment for the right to life movement by attempting to require taxpayers to fully fund abortions in federal programs and the domestic and international abortion industries themselves. This "abortion industry bailout" during a time of acute economic crisis is a dramatic overreach that far outstrips citizens' public opinion...

President Obama promised to forge "common ground" on an issue that has divided the nation since every protection for unborn children was wiped off the books with the Roe v. Wade and Doe v. Bolton decisions in 1973. Unfortunately, forcing taxpayers to fund the destruction of innocent lives is far, far away from any turf that could be labeled common ground.

The more Americans know of this proposed change in law, the more they will be forced to take sides, that is, in effect to join the pro-life movement. That is the definition of a political tipping point. Every step President Obama takes to advance the abortion bailout agenda puts our nation one step closer to confronting the tragic reality of abortion in America. Obama's overreach gives pro-life human rights advocates in the mold of Susan B. Anthony reason to hope. A turning point for protecting the unborn could well be on the horizon.

(Marjorie Dannenfelser, President of the Susan B. Anthony List, "Hope for Pro-Lifers: Obama Administration Overreaches on Abortion Funding," Human Events, 2/23)
Posted by DH at 8:37 AM