Gasp! A Reporter Injects Opinion Into CNBC News -- And It's Not a Liberal Opinion! 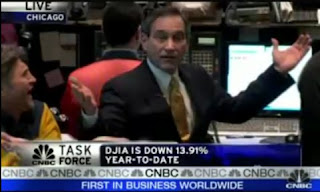 Brian Stelter gets a little snitty in the New York Times about CNBC's pride in running the video clip of Rick Santelli's now-famous Chicago Tea Party. (See this previous post.)

Mr. Stelter believes reporters are way out of line to "inject their opinions" into a story -- unless, of course, those opinions are properly and manifestly leftist.

Stelter's story does contain the entertaining news, however, that by Sunday the Santelli video clip "had been viewed nearly 1.7 million times, making it CNBC.com’s most popular video clip ever."