Will This Be the Last Sanctity of Life Proclamation? 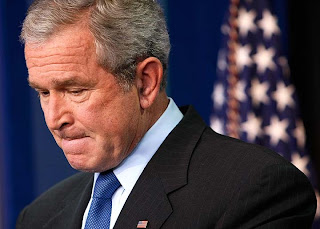 Of course, George W. Bush wasn't going to be President on this January 22nd, the anniversary of Roe v Wade. And he knew that his successor certainly wouldn't be mourning the onslaught of abortion which that Court decision unleashed on America nor would Barack Obama be proclaiming any Sanctity of Life Day.

So Bush went ahead, grabbed a pen a few days early and signed his final proclamation. God bless him.

Here, courtesy of Denise Burke over at the Americans United for Life Blog, is the text of the Bush proclamation. I suggest you print it off and hang on to it. It is going to be a long time before such a document comes from the Oval Office. And unless the Church wakes up to its responsibilities, including the priority of defending the sanctity of life, it may be the last one our decadent culture ever sees.

National Sanctity of Human Life Day, 2009
A Proclamation by the President of the United States of America

All human life is a gift from our Creator that is sacred, unique, and worthy of protection. On National Sanctity of Human Life Day, our country recognizes that each person, including every person waiting to be born, has a special place and purpose in this world. We also underscore our dedication to heeding this message of conscience by speaking up for the weak and voiceless among us.

The most basic duty of government is to protect the life of the innocent. My Administration has been committed to building a culture of life by vigorously promoting adoption and parental notification laws, opposing Federal funding for abortions overseas, encouraging teen abstinence, and funding crisis pregnancy programs. In 2002, I was honored to sign into law the Born-Alive Infants Protection Act, which extends legal protection to children who survive an abortion attempt. I signed legislation in 2003 to ban the cruel practice of partial-birth abortion, and that law represents our commitment to building a culture of life in America.

Also, I was proud to sign the Unborn Victims of Violence Act of 2004, which allows authorities to charge a person who causes death or injury to a child in the womb with a separate offense in addition to any charges relating to the mother.

America is a caring Nation, and our values should guide us as we harness the gifts of science. In our zeal for new treatments and cures, we must never abandon our fundamental morals. We can achieve the great breakthroughs we all seek with reverence for the gift of life.

The sanctity of life is written in the hearts of all men and women. On this day and throughout the year, we aspire to build a society in which every child is welcome in life and protected in law. We also encourage more of our fellow Americans to join our just and noble cause. History tells us that with a cause rooted in our deepest principles and appealing to the best instincts of our citizens, we will prevail.

NOW, THEREFORE, I, GEORGE W. BUSH, President of the United States of America, by virtue of the authority vested in me by the Constitution and laws of the United States, do hereby proclaim January 18, 2009, as National Sanctity of Human Life Day. I call upon all Americans to recognize this day with appropriate ceremonies and to underscore our commitment to respecting and protecting the life and dignity of every human being.

IN WITNESS WHEREOF, I have hereunto set my hand this fifteenth day of January, in the year of our Lord two thousand nine, and of the Independence of the United States of America the two hundred and thirty-third.
Posted by DH at 9:45 AM