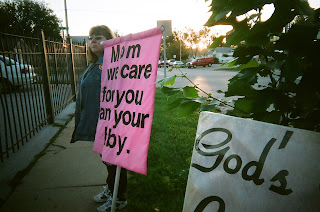 Maris Bentley, a pro-life sidewalk counselor who is also a teacher possessing a master’s degree in guidance counseling, wrote this fine op/ed column which (quite surprisingly) was published in the Omaha World-Herald's online edition. It's very good.

Thursday marks the 36th anniversary of the U.S. Supreme Court decision in Roe v. Wade, which legalized abortion in the United States. Since that day in 1973, 50 million Americans have been eradicated, primarily by those among us who should have the highest regard for human life: mothers and medical doctors.

Fifty million is a staggering number. For most of us, it is beyond our ability to comprehend. Fifty million dead would make the Vietnam Memorial Wall 80 miles long instead of 500 feet long. Fifty million gone, and we will never know what they had to offer.

I go weekly to the abortion mill in Bellevue to pray and to speak to those who are going in and out of that place. What I see and hear sickens me.

I see a teenager getting out of a car to throw up. She looks up at me with tears in her eyes as her mother yells at me and at her. They park the car, and the mother takes her daughter in. I see a man, angry and vulgar, escorting a woman in, her eyes downcast. She never looks up, and she never speaks.

I see an affluent, professional couple in an expensive vehicle with a child in a car seat in the back. The attractive, well-dressed woman gets out and reaches in the back to kiss her child before she goes in. The man, who tells me he is her husband, responds to my plea to save the life of his child by telling me it is not human life because there is not sufficient brain development. I encourage him to check the medical textbooks, and he smugly says, “I am a doctor.”

I see a young man who comes out to smoke and who tells me he is not ready to be a father yet. When I reply that it is too late, he is already a father, and I ask, “Why not adoption?” he tells me that he wouldn’t want someone else raising his child. I talk to the workers who tell me that this is a better alternative: These babies are unwanted and would likely be abused, become criminals and burdens to society.

This is the culture of death.

Years ago, when I first heard Pope John Paul II use the term and apply it to our country, I remember feeling surprised — and defensive.

We live in a country that has welcomed millions of immigrants, a country that rallies to protect democracy and freedom throughout the world, a country that sends billions of dollars of relief to the less fortunate. How could anyone think that ours was a culture of death? What I didn’t understand then, I do now.

Our affluence, our technology, our secularism and our materialism have brought us to this point. We are wealthy and powerful. We can have what we want, when we want it, even if we can’t afford it. We have kicked out God and traditional morality and embraced “whatever makes you happy” relativism.

Can’t have a baby? We’ll make one for you in the laboratory. Don’t want the baby you have? We’ll help you get rid of it at the Planned Parenthood clinic. Want to marry someone of the same sex? We’ll change the laws and reinterpret centuries of prohibitions. Don’t like your hairline or your gender? We’ve got the doctors. Worried about aging and death, suffering from Alzheimer’s or Parkinson’s? Those frozen embryos and aborted fetuses will be put to good use to find a cure. Otherwise, we’ll just mercifully put you out of your misery (when your intake exceeds your output).

This is the culture of death.

Roe v. Wade is both a cause and a symptom of what ails us. Our nation will never rise to previous heights of greatness. Indeed, our beloved country will continue its downward spiral into moral depravity and all that accompanies it as long as we continue to destroy what is truly our most precious natural resource: our children.
Posted by DH at 10:54 AM