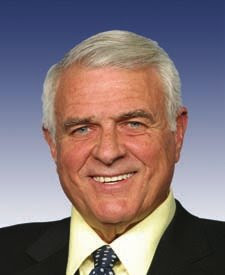 Fox News reports here on Congressman John Carter's nifty ploy to 1) eliminate all IRS penalties for Americans who pay past due taxes and 2) to highlight the sense of pompous privilige with which Democrats exploit the system.

...The legislation calls for the creation of what he calls the, "Rangel Rule," -- drawing attention to the recent legal issues of House Ways and Means Committee Chairman Charlie Rangel, D-N.Y., enabling citizens who fail to pay taxes on time to do so later with no additional fees.

Rangel, who writes the country's tax policies, acknowledged last fall that he failed to pay thousands in real estate taxes for rental income he earned from a property in the Dominican Republic. As of September 2008 the Harlem Democrat reportedly paid back more than $10,000 in taxes but that did not include any IRS penalties.

"Your citizens back home should have the same rights and benefits that come to you as a member of congress. You shouldn't be treated any differently under the law than your citizens back home," Carter said. He added that citizens should receive the "same courtesy" that the IRS is allegedly granting Rangel and Treasury Secretary Tim Geithner, who also recently acknowledged a failure to pay taxes.

Carter penned a letter to Rangel earlier this month requesting that he either pay the IRS fees or join him in co-sponsoring the legislation establishing the rule. "As Chairman of the House Ways and Means Committee, I believe you set an example for all American taxpayers in your dealings with the IRS, and that you must do so in a way that enforces blind justice without regard to wealth or status," he wrote in the January 6th missive.

A spokesman for the New York Democrat would not comment on the state of the tax issue, which is currently under investigation by the House Ethics Committee, but did respond to the Carter bill...

Carter, a former judge, said he is trying to focus in a what he believes is a double standard and add some levity to the debate. "I am raising this issue not so much to just push the issue but to open the discussion. I don't think it's wrong for us to start having a free discussion in congress and with a certain amount of humor in it about how should people be treated in congress," he said.

I suggest a quick "attaboy" is in order for Congressman Carter. He can be reached through this contact page. And if you'd like to contact your Congressperson and Senators to urge their support, you can use the same contact page.