Must Be the Season of the Witch 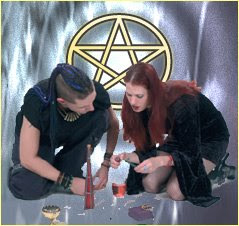 The title line above comes from an old Donovan song (1968 or thereabouts) but the look at Wiccan religion recently done by the Barna Group suggests that witchcraft may be a real and potent force here in this century.

Wicca has significant opportunities for growth, according to researcher George Barna. Among the conditions that would facilitate an increase in the number of Wiccans in America are:

1. the fascination that adolescents and teenagers have with casting spells, performing magic, being an integral part of a small group of like-minded people, and the opportunity for creative expression accompanied by demonstrations of power.

2. the highly individualistic nature of the faith.

3. its sensitivity to nature and the environment.

4. the moral ambivalence of its codes and beliefs at a time when America’s young adults, teenagers and adolescents are not attracted to strict moral rules and practices.

5. the necessity of a high degree of personal participation.

6. the appeal of the secrecy in which Wiccan activities and relationships are undertaken.

8. the growing determination of Americans to tolerate and accept worldviews, philosophies and religious practices that stray from those of the traditional or widely-recognized religions (e.g., Christianity, Judaism, Islam, Buddhism).

9. the cultural value placed upon personal experience and adventure rather than adherence to a strict ideology.

However, Barna also noted that Wicca faces significant growth challenges in the years to come. Among its challenges are:

1. the absence of a centralized organization that will fund, plan and intentionally promote its beliefs and practices.

2. the lack of one or a handful of charismatic, widely-recognized and respected leaders to champion its cause.

3. not having a recognized guidebook or body of "sacred literature" to define and facilitate its practices and growth.

4. the likelihood of stiff resistance from several of the larger, traditional faith groups that are popular in the U.S., such as Christianity.

Barna said he expects Wicca to continue to fly below people’s religious radar until it develops higher profile, more structured leadership, which is in some ways antithetical to Wiccan practices. However, he also expects significantly growing numbers of young Americans to embrace elements of Wiccan practice, such as spell casting and performing magic rituals, which have proven to be central behaviors featured in various popular media presentations in recent years. Many young adults will not consider themselves to be Wiccan but will adopt some of its practices and thinking alongside their more traditional religious views and behaviors.
Posted by DH at 11:23 AM