It's Certainly a New Way to Give Cops the Goat 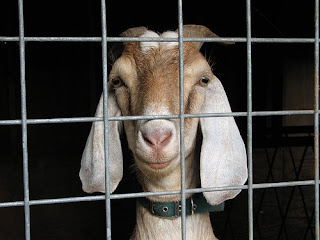 Nice trick...if you can pull it off. But you still land in jail, don't you? I mean why not a deer or, better still, a bird?

One of Nigeria's biggest daily newspapers reported that police implicated a goat in an attempted automobile theft. In a front-page article on Friday, the Vanguard newspaper said that two men tried to steal a Mazda car two days earlier in Kwara State, with one suspect transforming himself into a goat as vigilantes cornered him.

The paper quoted police spokesman Tunde Mohammed as saying that while one suspect escaped, the other transformed into a goat as he was about to be apprehended.

The newspaper reported that police paraded the goat before journalists, and published a picture of the animal.
Posted by DH at 11:16 AM