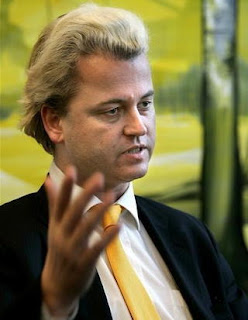 In the Netherlands, public criticism of Islam can get you censured, exiled and assassinated. And now it can even get you prosecuted by the government.

Bruce Bawer has a brief review in City Journal, describing sanity's downward spiral previous to the trial of Geert Wilders. He explains the sad and suicidal history of political correctness in which Dutch leaders have already surrendered freedom, balance and other virtues of Western culture to radical Islam. You can read Bawer's fine article in its entirety here.

“The Freedom Party (PVV),” read yesterday’s press release, “is shocked by the Amsterdam Court of Appeal’s decision to prosecute Geert Wilders for his statements and opinions. Geert Wilders considers this ruling an all-out assault on freedom of speech.”

The appalling decision to try [Geert] Wilders, the Freedom Party’s head and the Dutch Parliament’s only internationally famous member, for “incitement to hatred and discrimination” against Islam is indeed an assault on free speech. But no one who has followed events in the Netherlands over the last decade can have been terribly surprised by it. Far from coming out of the blue, this is the predictable next step in a long, shameful process of accommodating Islam—and of increasingly aggressive attempts to silence Islam’s critics—on the part of the Dutch establishment...

At times, it seems that he is the last prominent Dutch figure willing to speak bluntly about the perils of fundamentalist Islam. The same people who demonized Fortuyn have done their best to stifle Wilders. In April 2007, intelligence and security officials called him in and demanded that he tone down his rhetoric on Islam. Last February, the Minister of Justice subjected him to what he described as another “hour of intimidation.” The announcement that he was making a film about Islam only led his enemies to turn up the heat. Even before Fitna was released early last year, Doekle Terpstra, a leading member of the Dutch establishment, called for mass rallies to protest the movie. Terpstra organized a coalition of political, business, academic, and religious leaders, the sole purpose of which was to try to freeze Wilders out of public debate. Dutch cities are riddled with terrorist cells and crowded with fundamentalist Muslims who cheered 9/11 and idolize Osama bin Laden, but for Terpstra and his political allies, the real problem was the one Member of Parliament who wouldn’t shut up. “Geert Wilders is evil,” pronounced Terpstra, “and evil has to be stopped.” Fortuyn, van Gogh, and Hirsi Ali had been stopped; now it was Wilders’s turn...

But Wilders—who for years now has lived under 24-hour armed guard—would not be gagged. Thus the disgraceful decision to put him on trial. In Dutch Muslim schools and mosques, incendiary rhetoric about the Netherlands, America, Jews, gays, democracy, and sexual equality is routine; a generation of Dutch Muslims are being brought up with toxic attitudes toward the society in which they live. And no one is ever prosecuted for any of this. Instead, a court in the Netherlands—a nation once famous for being an oasis of free speech—has now decided to prosecute a member of the national legislature for speaking his mind. By doing so, it proves exactly what Wilders has argued all along: that fear and “sensitivity” to a religion of submission are destroying Dutch freedom.
Posted by DH at 7:58 AM