Under Pressure, Richard Cizik "Reluctantly Resigns" from the NAE 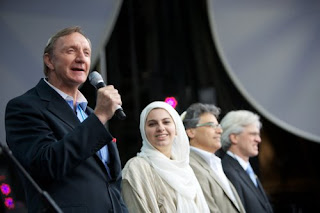 A few thoughts on the resignation yesterday of Richard Cizik as the Chief Lobbyist and Vice President for Governmental Affairs of the National Association of Evangelicals:

1) I am very glad Cizik resigned. I've been urging his removal for a year and a half. (See Wednesday's post.) However, I remain frustrated about NAE President Leith Anderson's attitude towards the matter. Even with Cizik's increasing liberalism (theological as well as political) and despite Cizik's arrogance and irresponsibility (getting paid to represent the views in Washington of the NAE membership yet on many crucial points ignoring those views), Anderson was reluctant (his very word) to ask Cizik to leave.

Huh? Wishes he could do the interview again? So he could better hide his liberal views on homosexuality, abortion, the authority of Scripture, etc. from the NAE membership? And this cluck's resignation is "probably best" for the NAE? Good grief. Such timidity and imprecision, particularly with the issues involved, does not speak well for this stumbling organization.

2) The spin is already in that Cizik is simply a victim of those hard-shell, intolerant fundamentalists who are against clean air and water. The AP report mentioned above is a case in point. Cizik is presented as a hero there for pushing evangelicals into environmental action. The AP reporter calls it broadening the agenda.

But, in truth (and for now foregoing a discussion of the lack of sound scientific reasoning for Cizik's left-leaning brand of environmentalism), Cizik wasn't broadening the agenda at all. He was, like other neo-evangelical liberals, shrinking that agenda by downplaying (when they're not actually removing all together) such critical moral issues as killing preborn children.

3) If you responded to Wednesday's post here on Vital Signs Blog (or any other place that detailed the opinions shared by Rev. Cizik on that NPR radio interview) by praying for his removal from the NAE or, much better still, accompanying your prayer with a polite letter, e-mail or phone call to the organization, aren't you particularly pleased? You were a light for righteousness, a voice for truth and justice, a watchman on the wall whose convictions on the Bible's authority moved you to action. Way to go!

That's a key reason for the very existence of this blog, to help you act in behalf of your beliefs, your political philosophy and, most of all, your Faith.

If, however, you're a frequent visitor to Vital Signs Blog and haven't yet started using it to help you be a better advocate for your convictions, please start now. Together we can truly make a difference.

And finally, 4) Now that Richard Cizik is gone from the NAE, look for his liberalism to find its full voice. Like a Tony Campolo, or a Franky Schaeffer, or a Bill Moyers, Cizik is destined to become, especially as the legend grows of his being a victim of the Religious Right, a real darling of the Religious Left.
Posted by DH at 8:28 AM