"Bailout Bush" -- A Sour (and Dangerous) End to This Presidency 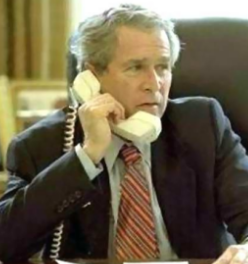 The Republican-led rejection of the auto bailout probably doesn't actually prevent a federal bailout of Detroit, but it does have noteworthy ramifications.

Republican staff say Sen. Bob Corker's (R-Tenn.) compromise bailout was acceptable to many Republicans, but union officials rejected it because of wage and benefit concessions. Such a rejection reflects union confidence that a larger Democratic majority combined with a Democratic President will produce a favorable bailout.

Immediately upon the Senate's failure to move ahead on the bill, word leaked out that Bush administration would use the financial bailout passed in October for at least a patch until the 111th Congress can pass a bailout in January. This move highlights the nature of the Wall Street bailout as an open-ended bottomless slush fund for the Bush—and soon the Obama—administration to spend as it pleases.

Bush's relentless push for more bailouts, and his proclamation that he abandoned free market principles to save the free market—painting himself as some sort of reluctant new Franklin Roosevelt—heightens conservative and Republican disappointment in their outgoing president.