Won't Anyone Face Financial Facts When It Comes to the U.S. Auto Industry? 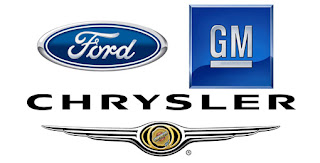 It's only common sense, right? Throwing good money after bad isn't smart. And when the money thrown is somebody else's, it isn't fair either.

But when it comes to the American economy nowadays, common sense is anything but common.

And a tragic case in point is how the whining automobile manufacturers are likely to get huge cash infusions from the American taxpayers despite Detroit's stubborn failure to face financial facts. Martin Feldstein describes here a few of the most salient:

...The Big Three pay much higher wages than production workers are paid in the nonunion auto firms and in the general economy. And the health-care costs of current workers and retired union members are an enormous additional burden.

The simplest solution is to allow GM and the others to file for bankruptcy. If the companies file under Chapter 11, they would be able to continue producing cars, and the work force would remain employed while the firms reorganized. The firms would also be able to get short-term credit under bankruptcy protection.

The bankruptcy court could require the unions to rewrite contracts, bringing wages down to levels that would allow the firms to compete and therefore to maintain employment. Scaling back employee and retiree health benefits would further improve price competitiveness and allow better cash wages.

The firms' bondholders and other creditors would have to take losses. Shareholders' fate would depend on how firms responded to this restructuring. Only by reducing wages and benefits will the firms be able to survive and provide good jobs.

If politicians in Washington cannot live with the thought of the auto industry in bankruptcy, and decide that some cash must be delivered, this should be done as part of a fundamental restructuring plan imposed by the government in exchange for those funds...
Posted by DH at 5:34 AM