"Suppress Criticism of Islam and You Will Be Spared Retaliatory Violence" 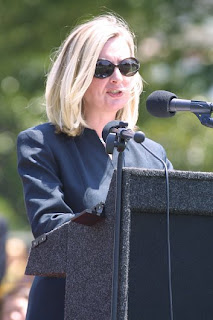 Nina Shea, international human-rights lawyer and now the director of the Center for Religious Freedom at the Hudson Institute, has a brief but important article over at The Weekly Standard about the latest developments in the "religious harmony" department...and how they reveal radical Islam is becoming even more intolerant and coercive.

There's no doubt about it. The move to severely restrict the freedoms of speech and religion under the guise of banning "hate speech" is well underway.

Two international meetings to promote interfaith harmony were held in the last two weeks, one in New York and one in Rome. The former, called by King Abdullah of Saudi Arabia under the auspices of the United Nations, drew some 20 heads of state to discuss a "Culture of Peace." The latter brought together Muslim and Catholic scholars at the Vatican in the latest session of the dialogue called A Common Word. Both gatherings underscored the gulf between us. At both, all parties spoke for peace and tolerance, but they often meant different things...

For the past decade, the Saudi-based Organization of the Islamic Conference (OIC) has pushed the U.N. to adopt a universal ban on defaming Islam. This measure would aim to curb the freedom not only of Danish cartoonists but also of scholars, writers, dissidents, religious reformers, human rights activists, and anyone at all anywhere in the world who criticizes Islam. This is already the effect of the domestic laws against apostasy and blasphemy that exist in Saudi Arabia, Iran, Pakistan, Egypt, and other states of the Islamic Conference.

Inside Saudi Arabia, there is, of course, a complete absence of religious freedom. All churches are banned, and apostates can be put to the sword (though in practice they more often suffer long prison terms). So the Saudi king's initiative might be seen in the West merely as a brazen public relations ploy. From the OIC perspective, however, the Saudi quest for religious understanding is more purposeful. The king, as the defender of the faith, has come to strike a deal with the West: Suppress criticism of Islam and you will be spared retaliatory violence...
Posted by DH at 6:04 AM