Obama Hires More Clinton Insiders -- One Tied to Marc Rich, the Other to Fidel Castro 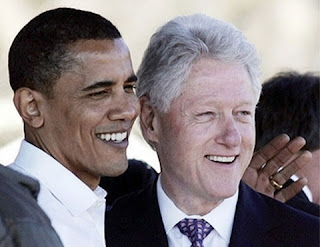 Here is a Washington Times story about Eric H. Holder Jr., Obama's pick to direct the Justice Department. Holder served as the deputy A.G. under Clinton and, in that role, was the key fellow in winning the extremely controversial pardon of billionaire fugitive financier Marc Rich.

And from Humberto Fontova, writing for American Thinker, there's this:

Among the throng of Clinton regime retreads recruited for the Obama administration we find Gregory Craig. Craig served as Obama's advisor on Latin American during the campaign, and was appointed last week as chief White House Counsel. The MSM has mentioned Craig's role as Bill Clinton's impeachment lawyer, but mostly has omitted mention of Craig's role as chief facilitator for Fidel Castro's shanghaiing of Elian Gonzalez.

Officially Craig served as attorney for Elian's father, Juan Miguel Gonzalez. This humble man worked as a hotel doorman in a nation where the average monthly salary is $16. The high-rolling Gregory Craig worked for Washington D.C.'s elite firm, Williams & Connolly, one of America's highest-priced law firms.

Upon accepting the case, Gregory Craig had flown to Cuba for a meeting with Fidel Castro. Craig's remuneration, we learned shortly after his return, came from a "voluntary fund" set up by the United Methodist Board of Church and Society and "administered" by the National Council of Churches. The same reporters and pundits, who routinely erupt with snide snorts midway through any statement by a Republican press secretary, reported this item with a straight face.

But then, this media also reports that Castro's Cuba provides free and exquisite health-care. And the explanation of Craig's funding issued from the same source...
Posted by DH at 6:46 AM