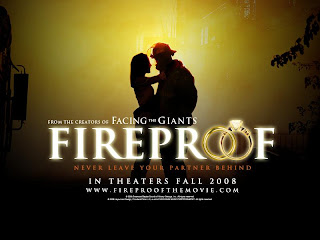 Rick Pearcey writes with his characteristic wit and wisdom about the dramatic film Fireproof (and more) in this engaging article.

...“The point I’m trying to make,” said one critic, is “should movie theaters be an appropriate setting for religion? Seems to me it’s a little disrespectful to God to invoke his name while chewing on popcorn and slurping on cokes.”

Right -– it’s out of respect for the Creator that we banish him from entertainment society. That might do for bluebloods in suits at tea parties congratulating themselves for being different from “those people.”

But the real Creator describes himself as not afraid or too “spiritually minded” to get his hands dirty and muck it up with human beings. He moves by humanity and conviction, not by style points awarded by the Washington Post.

Of course a film like Fireproof belongs in movie theaters. An Obama-packed Supreme Court may well change this, but there is currently no wall of separation between church and cinema...
Posted by DH at 6:40 AM