Japan: A Country of Martyrs 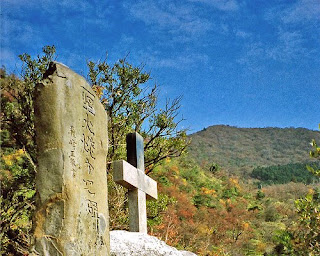 Faith McDonnell reports for the Institute on Religion and Democracy on the first beatification ceremony to ever take place in Japan. It happened just a couple of days ago on November 24th. Cardinal Jose Saraiva Martins conducted the ceremony, honoring 188 of the Christian martyrs who were killed between 1603 and 1639.

The beatification is linked to sentiments expressed by Pope John Paul II during his visit to Japan in 1981. "Deeply moved by the faith of the Japanese Catholics, and by the legacy of those who had given their lives for their faith, John Paul II had told an archbishop in Nagasaki that Japan was a country of martyrs and that they should be recognized. Pope Benedict XVI issued the decree for the beatification last year..."

As Fr. Mark Tardiff recently described it, within sixty years after Portuguese Jesuit Francis Xavier began preaching the gospel of Jesus Christ in Japan (mid 16th Century) “the Shogun unleashed a persecution of the young Church which rivaled in fury that of the Emperor Diocletian at the beginning of the fourth century.”

Nevertheless, the "power of Christ was shown forth in the Japanese martyrs of the seventeenth century as clearly as it was in the Christians of the first centuries. There is the same clear eyed awareness of their choice, the same unflinching conviction in the face of demands to renounce their faith, the same unbowed and even joyful spirit in the face of cruel suffering, the same more than human strength that witnessed to Another who suffered in them. Torments and death could not overcome them; they were killed and they conquered.”
Posted by DH at 9:11 AM