Why Are There More Global Warming Skeptics Nowadays? 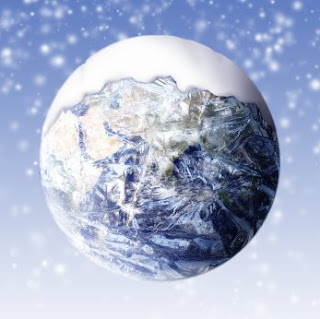 In early September, I began noticing a string of news stories about scientists rejecting the orthodoxy on global warming. Actually, it was more like a string of guest columns and long letters to the editor since it is hard for skeptical scientists to get published in the cabal of climate journals now controlled by the Great Sanhedrin of the environmental movement.

Still, the number of climate change skeptics is growing rapidly. Because a funny thing is happening to global temperatures -- they're going down, not up...

Prior to the past decade of climate hysteria and Kyoto hype, the MWP (Medieval Warm Period) was a given in the scientific community. Several hundred studies of tree rings, lake and ocean floor sediment, ice cores and early written records of weather -- even harvest totals and censuses --confirmed that the period from 800 AD to 1300 AD was unusually warm, particularly in Northern Europe.

But in order to prove the climate scaremongers' claim that 20th-century warming had been dangerous and unprecedented -- a result of human, not natural factors -- the MWP had to be made to disappear. So studies such as Michael Mann's "hockey stick," in which there is no MWP and global temperatures rise gradually until they jump up in the industrial age, have been adopted by the UN as proof that recent climate change necessitates a reordering of human economies and societies...

Don Easterbrook, a geologist at Western Washington University, says, "It's practically a slam dunk that we are in for about 30 years of global cooling," as the sun enters a particularly inactive phase. His examination of warming and cooling trends over the past four centuries shows an "almost exact correlation" between climate fluctuations and solar energy received on Earth, while showing almost "no correlation at all with CO2."

An analytical chemist who works in spectroscopy and atmospheric sensing, Michael J. Myers of Hilton Head, S. C., declared, "Man-made global warming is junk science," explaining that worldwide manmade CO2 emission each year "equals about 0.0168% of the atmosphere's CO2 concentration ... This results in a 0.00064% increase in the absorption of the sun's radiation. This is an insignificantly small number."

Other international scientists have called the manmade warming theory a "hoax," a "fraud" and simply "not credible."

For nearly 30 years, Professor Christy has been in charge of NASA's eight weather satellites that take more than 300,000 temperature readings daily around the globe. In a paper co-written with Dr. Douglass, he concludes that while manmade emissions may be having a slight impact, "variations in global temperatures since 1978 ... cannot be attributed to carbon dioxide."

Moreover, while the chart below was not produced by Douglass and Christy, it was produced using their data and it clearly shows that in the past four years -- the period corresponding to reduced solar activity -- all of the rise in global temperatures since 1979 has disappeared. 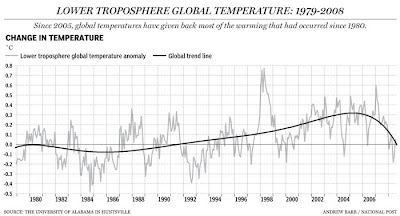