Want to Keep Your Neighborhood from Burning? Better Vote Democrat. 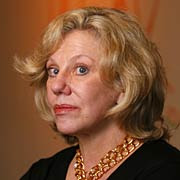 Apparently extortion has become an integral part of the Democrats' "audacity of hope" as liberals all over the map are insisting that only racism could lose the election for Barack Obama. Indeed, there are so many forecasts of riots, violent backlash and blood in the streets that some admit they're voting for Obama just to keep things quiet on election night.

But among the wildest and woolliest of these folks is the oft-married, literary celebrity Erica Jong: "If Obama loses it will spark the second American Civil War. Blood will run in the streets, believe me. And it's not a coincidence that President Bush recalled soldiers from Iraq for Dick Cheney to lead against American citizens in the streets."

As I said in a previous post this morning, irrationality reigns.

For more of Jong's "opinions" as well as descriptions of how her friends Jane Fonda, Ken Follett, Naomi Wolfe and others are holding on, check this out.