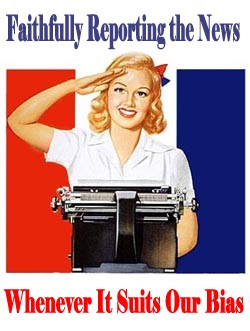 Michael Graham over at the Boston Herald tells you what you already know but there's still good reasons to read his column, including examples will make for great re-telling at the water cooler.

Did you see that amazing video obtained by the Los Angeles Times of Sen. Barack Obama toasting a prominent former PLO member at an Arab American Action Network meeting in 2003? The video in which Obama gives Yasser Arafat’s frontman a warm embrace, as Bill Ayers look on?

You haven’t seen it? Me, neither. The Los Angeles Times refuses to release it.

And so an incriminating video of Obama literally “palling around” with PLO supporters becomes one more nail in the coffin of “objective journalism.”

Alas, the obit for objective reporting has been buried - along with the stories about Obama’s 2001 support for court-imposed “redistribution of wealth” and Joe Biden’s latest gaffe...

So it is particularly heartbreaking for me to see the death of objective journalism. And believe me - it is stone cold dead. Sacrificed on the altar of service to Barack Obama.

Former New York Times [NYT] columnist and veteran newspaperman Michael Malone knows it. “I’ve begun - for the first time in my adult life - to be embarrassed to admit what I do for a living,” he said...
Posted by DH at 9:35 AM