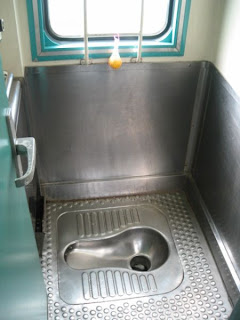 Said Obama, "Everybody's watching what's going on in Beijing right now with the Olympics , Think about the amount of money that China has spent on infrastructure. Their ports, their train systems, their airports are vastly the superior to us now, which means if you are a corporation deciding where to do business, you're starting to think, 'Beijing looks like a pretty good option.'"

Hmm. Only a good option, as Geraghty points out, if you don't mind the slave labor that built them, the effective pollution controls they've omitted, the severe power shortages that plague them, and so on.

And yes, the photo here is just what you think it is...the toilet in one of those "vastly superior" trains that Senator Obama is praising.