Whose to Blame for the Crisis? The Democrats' Disastrous Dismantling of the Bush Energy Plan 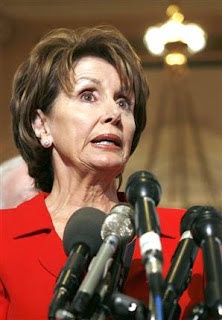 ...A New York Times headline from August 20, 2003, sums it up: "Ambitious Bush Plan Is Undone by Energy Politics."

They had no plan themselves, mind you — apart from massively expensive global warming initiatives that would force Americans to lower their standard of living to Third World levels by spending as much as $800 billion a year to cool Earth.

Yet, if Bush's plan had been put in place in 2001, we'd have replaced millions of barrels of oil, billions of tons of coal and untold trillions of acre feet of natural gas with clean, safe nuclear power.

When the Democrats took control of Congress in 2007, and oil was $50 a barrel and corn $2 a bushel, House Speaker Nancy Pelosi and Senate Majority Leader Harry Reid promised an energy plan. We're still waiting for it. Today, crude oil is $134 and corn is $6.50.

It's pretty clear who's to blame: Congress. In fact, House and Senate Democrats have obstructed any progress in America's fight to regain some semblance of energy independence.

"Now is the time for Congress to move and get something done," President Bush said all the way back in August 2003. He's still waiting, and so are we...

The entirety of this brilliant June 16 editorial from Investor's Business Daily is reprinted by Smart Green USA right here.
Posted by DH at 10:08 AM