What Will the Next President Do to the Supreme Court? 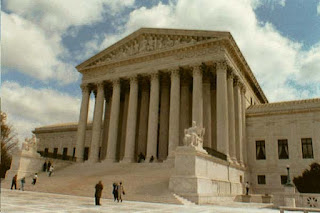 Stuart Taylor Jr., the writer of the National Journal's latest cover story, used to report on the Supreme Court for the New York Times. He is now an author, a Contributing Editor at Newsweek, a regular columnist for National Journal, and a Nonresident Senior Fellow at the Brookings Institute. He is a Harvard Law School grad who once worked in the profession for the D.C. firm of William, Cutler and Pickering.

He is certainly not in the conservative camp but Taylor's writings are substantially more honest and insightful than most of what is produced by the mainstream media. And that's why particular attention should be drawn to his NJ article, an analysis of what will likely happen to the Supreme Court (and thus, the nation) depending on who wins the November election.

Writes Taylor of Obama, "The presumptive Democratic nominee exudes determination to move the Court sharply to the left if he gets the chance...

"The conservative nightmare (and liberal dream) is an Obama Court requiring taxpayers to fund essentially unlimited abortion rights throughout pregnancy; ordering all 50 states to bless gay marriage; expanding and perpetuating the use of racial preferences far beyond the 25-year phaseout suggested by the justices five years ago; prohibiting tuition vouchers for religious schools; stripping "under God" from the Pledge of Allegiance; banning the death penalty; striking down the new federal wiretap law; expanding judicial oversight of military detentions, CIA interrogations, and perhaps other operations worldwide; opening the floodgates to big-dollar lawsuits against business; eroding property rights; and perhaps creating new constitutional rights to physician-assisted suicide, human cloning, and massive government welfare and medical care programs...."

Taylor suggests that the competing visions may not turn out as extreme as either political party fears (or hopes) and much of the remaining article explains his reasoning. Along the way, Taylor also examines several other relevant matters; i.e., recent Court history, the struggle over appointments, the huge importance of Senate leverage, the pressure to expand the Court's diversity, the battles of ideology over the federal District and Appeals courts, and more.

It's an enlightening, thought-provoking article.
Posted by DH at 12:28 PM