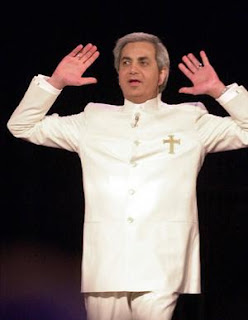 Here's yet another example of the teachings of Christianity being wildly distorted and then exploited by malicious men of the cloth. This story involves a couple of the usual characters, the egocentric (and eerie) televangelists Benny Hinn and Todd Koontz, shepherds whose lavish wealth has come from their manipulative talents not to lead the sheep...just to shear them.

Pastor Tommie Ferreira of the AGS Church in Johannesburg, who was himself helping out in Hinn's grandiose event said one of Hinn's American guest speakers, Pastor Todd Koontz, spoke about financial burdens and said 500 audience members would receive "an exceptional blessing". "He said the service would yield millionaires and billionaires within 24 hours. Everyone had to donate $1,000 because an exceptional blessing rested on $1,000." Koontz apparently really had the congregation scrambling when he said, "This blessing will be poured out for only two minutes." Ferreira said: "People stormed to the front - poor people, rich people, people from all sections of our society."

Hinn's co-pastors apparently had credit-card machines ready with which they could take donations. "He (Koontz) said God would bless the people's credit cards and they would be able to rule over South Africa with their money."

"Eventually there were no fewer than 1,000 people who made such donations."...

The Lord hasn't yet made millionaires out of any of these people, though two have come forward to testify they soon will be. It seems they received e-mails from "the widow of a Nigerian prince" promising them $200 million if they would only send over a $500 administration fee.

Gullibility is a hardy vice.