What Part of NO! Do EU Bureaucrats Not Understand? 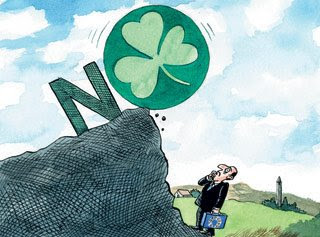 Theodore Dalrymple explains in the online edition of City Journal that "only the Irish had the guts" to hold a referendum on the proposed European Union Constitution, the latest move of the EU's super-bureaucrats to eliminate all traces of national sovereignty and democracy on the continent (and nearby islands).

"Unfortunately," writes Dalrymple, "the Irish people got the answer wrong. They voted no, despite their political leaders’ urging that they vote yes. No doubt the people will be given an opportunity in the future—or several opportunities, if necessary—to correct their mistake and get the answer right, after which there will be no more referenda."

And indeed those bureaucrats are wasting no time moving ahead with their constitutional schemes. What do they care about Irish voters? Even less than they care about other moves against EU uniformity made previously by Poland, Malta, France, and Holland.

Dalrymple continues, "Anyway, what does it really matter if referendum after referendum, in Denmark, France, the Netherlands, and Ireland, defeats the proposals of the European political class? The proposals can always be enacted regardless, by other means. What does it matter if two-thirds of Germans regret monetary unification, as do the French and the Italians? What does it matter if prime minister Gordon Brown refused to hold a referendum on the treaty in Britain—having previously promised one—once he realized how roundly voters would reject it? As European Commission president José Manuel Barroso said after the Irish vote: the Lisbon Treaty is not dead, it is living. What the people of Europe want is completely irrelevant."

As I said last week in a post about Ireland's referendum and the EU's crass response, " European Union bureaucrats are like American judges -- they don't care a lick about democracy. They want their way, despite written Constitutions, despite public referenda, despite tradition, scientific fact, or morality. They bluster, boast and bully until their whims be satisfied. And the public citizen? He slides whimperingly away and cedes the field."
Posted by DH at 5:29 AM