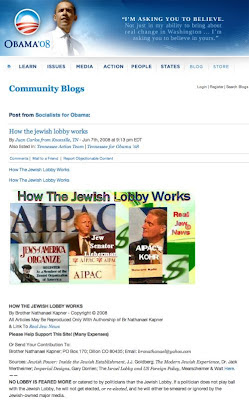 The vigilant watchmen over at Little Green Footballs noted the inclusion of a "Socialists for Obama" page at the official Barack Obama web site. And in that page was a seriously offensive article (complete with sneering captions on photographs) entitled, "How the Jewish Lobby Works." It's been on the Obama site since April.

Says LGF, "This group of Jew-haters has apparently been at his site since April, and there are numerous comments from Obama supporters that are indistinguishable from the hate speech you’ll find at neo-Nazi sites...There’s something deeply wrong with a presidential candidate who attracts so many of these hateful psychotics. Read the comments; you just won’t believe what is allowed to be posted at Barack Obama’s web site."

Well, unfortunately, you can't read them anymore. Because as Lucianne Goldberg predicted on her site (the one which directed me to the LGF post this morning), "Let's see how long it takes for them to take it down. One bagel....two bagels....three..."

Three must have done it. For, sure enough, visitors now using the link simply find an "ERROR: invalid page requested" message waiting for them.

This points out two interesting things. 1) The leftists at the Barack Obama official web site are certainly tuned in to what's being said by the conservative bloggers at such places as LGF and lucianne.com. But, 2) Such careful observance is certainly lacking by members of the MSM. For they overlooked completely the "Socialists for Obama" article, though it represents the kind of "hot news" reporters used to drool over.

But then what's the surprise? They won't even report the gaffes, goof-ups and tall tales Obama tells in public speeches.

Anyhow, though Obama's webmaster did a quick fix and removed the controversial section, the situation underscores the ever-growing power of the new media to control events. Yes, the MSM remains an entrenched and powerful force in Western culture, and that's a huge advantage to the left. But the monopoly is defintely breaking up as talk radio and bloggers stake out new territory, sharpen their skills, and reach more millions with the facts of life that would otherwise go unreported.

Let's hope this particular story (i.e.,Obama's allowing ugly, racially divisive tripe on his web site for two months) finds some traction.
Posted by DH at 8:52 AM