Bio-engineers at California University have presented evidence that "old" stem cells are still able to perform regenerative functions if they receive appropriate chemical signals. This builds on earlier findings that when adult stem cells derived from "old" tissue are placed in an environment of young blood, the stem cells behave as if they are young again as well.

"We are one step closer to having a point of intervention where we can rejuvenate the body's own stem cells so we don't have to suffer from some of the debilitating diseases associated with ageing," said the study's co-author, Morgan Carlson.

The findings of the study were published Sunday in an advanced online issue of the journal Nature. 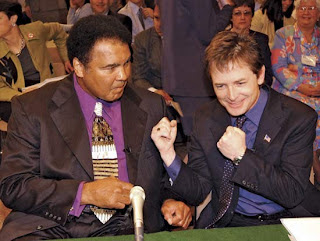 Meanwhile, in Australia, scientists have discovered that stem cells found in the back of a patient's nose can produce dopamine, the chemical which is missing in people with Parkinson's disease, the affliction endured by such people as Muhammad Ali and Michael J. Fox.

Professor Peter Silburn from the University of Queensland said it was an important breakthrough, as the cells could be easily harvested from patients. He said the next step was to test the cells in primates, then move to human trials in the next three years.
Posted by DH at 11:31 AM