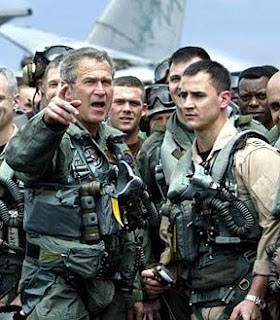 James Kirchick, an assistant editor of the New Republic, has written a rather remarkable article for the Los Angeles Times; namely, an article that defends the Bush administration from Democrat charges of deception regarding the Iraq war. George W. Bush may have believed inaccurate information which led to his war decisions, Kirchik asserts, but the Democrats then did the very same thing. Therefore, to blame Bush after the fact the way the Democrats and the press have done has been not only bad for the country and bad for the war effort, but an example of rank hypocrisy.

...Nearly every prominent Democrat in the country has repeated some version of this charge, and the notion that the Bush administration deceived the American people has become the accepted narrative of how we went to war.

Yet in spite of all the accusations of White House "manipulation" -- that it pressured intelligence analysts into connecting Hussein and Al Qaeda and concocted evidence about weapons of mass destruction -- administration critics continually demonstrate an inability to distinguish making claims based on flawed intelligence from knowingly propagating falsehoods.

In 2004, the Senate Intelligence Committee unanimously approved a report acknowledging that it "did not find any evidence that administration officials attempted to coerce, influence or pressure analysts to change their judgments." The following year, the bipartisan Robb-Silberman report similarly found "no indication that the intelligence community distorted the evidence regarding Iraq's weapons of mass destruction."

Contrast those conclusions with the Senate Intelligence Committee report issued June 5, the production of which excluded Republican staffers and which only two GOP senators endorsed. In a news release announcing the report, committee Chairman John D. Rockefeller IV got in this familiar shot: "Sadly, the Bush administration led the nation into war under false pretenses."

Yet Rockefeller's highly partisan report does not substantiate its most explosive claims. Rockefeller, for instance, charges that "top administration officials made repeated statements that falsely linked Iraq and Al Qaeda as a single threat and insinuated that Iraq played a role in 9/11." Yet what did his report actually find? That Iraq-Al Qaeda links were "substantiated by intelligence information." The same goes for claims about Hussein's possession of biological and chemical weapons, as well as his alleged operation of a nuclear weapons program.

Four years on from the first Senate Intelligence Committee report, war critics, old and newfangled, still don't get that a lie is an act of deliberate, not unwitting, deception. If Democrats wish to contend they were "misled" into war, they should vent their spleen at the CIA...

This may sound like ancient history, but it matters. After Sept. 11, President Bush did not want to risk allowing Hussein, who had twice invaded neighboring nations, murdered more than 1 million Iraqis and stood in violation of 16 U.N. Security Council resolutions, to remain in possession of what he believed were stocks of chemical and biological warheads and a nuclear weapons program. By glossing over this history, the Democrats' lies-led-to-war narrative provides false comfort in a world of significant dangers.

"I no longer believe that it was necessary for us to get involved in South Vietnam to stop communist aggression in Southeast Asia," Romney elaborated in that infamous 1967 interview. That was an intellectually justifiable view then, just as it is intellectually justifiable for erstwhile Iraq war supporters to say -- given the way it's turned out -- that they don't think the effort has been worth it. But predicating such a reversal on the unsubstantiated allegation that one was lied to is cowardly and dishonest...