Partying with the Abortionists: Kansas Governor Caught on Film 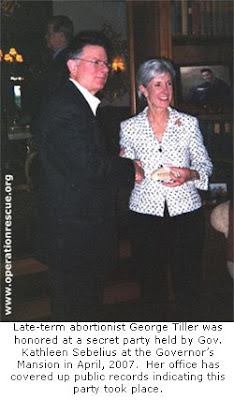 Kansas Governor Kathleen Sebelius -- yes, that Kathleen, the self-styled Catholic whose rabid pro-abortion politics have, on the one hand, earned her the censure of her Archbishop and, on the other hand, earned her the consideration by Barack Obama as his running mate -- is at it again with more evidence (pictures even) of her cozy relationship with the notorious late-term abortionist George Tiller.

Here's an Operation Rescue report about an extravagant (and secret) party put on by the Democrat Governor at the Governor’s mansion last year for Tiller. Indeed, Tiller and his staff were the only guests invited to the gala event that featured, according to the OR source, a menu of steak and lobster. The swank affair was held at the very time that the Attorney General’s office was investigating Tiller and while there were increasing calls by Kansas legislators for criminal charges to be filed against the abortionist.

Again, here's the story and photos. And, if there's any impartiality at all left among Kansas journalists, this is a story we'll be hearing a lot more about.
Posted by DH at 8:10 AM