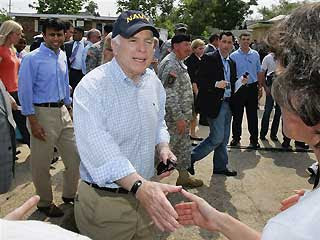 Ben Domenech over at Red State has an intriguing article about the course for a Republican victory needing to be "responsibly anti-Bush" and how uniquely fitted for that course is Senator John McCain.

More than a year ago, a conversation among RS editors ended with this point being made, and solidly: that whoever the nominee was (at that point, Rudy Giuliani seemed likeliest), he would have to steadily and respectfully run against the record of George W. Bush.

The chief debate among the Republican base during the primary season concerned a central disagreement about which part of that Bush record deserves running against. The fiscal conservatives argued that a break from Bush’s fatigue-inducing economic policy is what’s needed. Anti-immigration Republicans pointed to Bush’s stalled border policies and yelled. The libertarians argued – in an odd break from fact-based analysis for otherwise rational people – that Bush’s Christianity-tinged pro-life and pro-marriage domestic policies overreached, and should be rebuked to attain some portion of the solidly Democrat atheist, agnostic, and mainline church demographic. Still other GOPers said the moment demanded only a break of stylistic points – claiming Bush’s policies were in large part correct, but they were sold to the public with about as much grace as the New Coke campaign.

This always seemed a bit too complex to me. In my view, the next candidate needed to run a campaign that respectfully rebuked the President on the two major overarching issues for his unpopularity – two areas that did far more damage to his brand outside the beltway than any steel tariffs or faith-based funding: The mismanagement of the war in Iraq, and the failure to respond to the disaster of Katrina.

To the unexpectedly good fortune of the Republican Party, the reemergence of John McCain has provided us with the only other candidate who can conceivably run a campaign that achieves both these aims...

The McCain campaign already has staked out turf that reveals their unique capacity for criticizing the Bush administration on the war while still winning the overwhelming majority of people who voted for the man and his post-9/11 policy. McCain wins both pro-war and anti-war Republicans – the latter more a statement of management then purpose. He wins frustrated vets who want the boys to come home, and frustrated vets who want the surge to work. After years of building him up as the noble maverick on issue after issue, the MSM’s calls of “out of touch” and “warmonger” are just too late to be effective – and likely to backfire in their faces should anyone point out that Marine lance corporal Jimmy McCain just got back from Iraq, and should be headed out again soon. The war is not his problem.

Yet until this week, it remained to be seen whether McCain could effectively confront the Bush administration’s inaction in Katrina with a response that demonstrated his recognition of that colossal failure, his ability to grasp the management demands at issue, and his commitment to lead when the next disaster comes.

McCain passed this test. Oh, did he pass it...

Here's the rest of Domenech's commentary.
Posted by DH at 9:45 AM