Belarus' Sentencing of Peaceful Demonstrators Elicits US and EU Protests 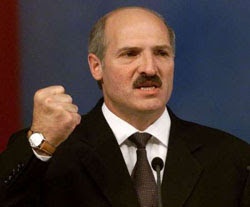 From the "It's So Hard to Get Along with Dictators" Department comes a couple of Radio Free Europe reports about the ever worsening relationship between Belarus and the United States.

In one incident, the U.S. State Department (through spokesman Tom Casey) has asked Belarus "for the immediate and unconditional release of [Andrey] Kim as well as all political prisoners in Belarus." Kim was one of ten young Belarusians sentenced a couple of days ago to 18 months in prison simply for participating in a peaceful (but "unsanctioned") rally back in January which supported the rights of small-business owners. The Belarusian court also found Kim guilty of "violence or threats of violence against a police officer."

Writes Casey, "It is another example of the Belarusian government working to silence political opposition and silence civil society."

The next day a similar protest and appeal was registered by the European Union. E.U. External Relations Commissioner Benita Ferrero-Waldner condemned the conviction of Kim and the others. "I call for the immediate and unconditional release of all those arrested whilst demonstrating peacefully, as well as all other political prisoners."

The second example involves the Belarusian Foreign Ministry's subsequent move to further reduce the staff of the U.S. Embassy in Minsk. In a puerile action reminiscent of Soviet-era shenanigans, Belarus insisted the embassy staff (already lowered to a skeleton crew of 17 because of Belarusian demands issued just last month) should be now be shaved to a mere five!

Belarusian authorities, acting on the desires of the country's dictatorial president, Alexander Lukashenka (photo upper right), are justifying the bizarre action because the United States is continuing economic sanctions against Belarus. The U.S. "expressed a protest against the new demand and noted that this unprecedented and unjustified move by the Belarusian authorities would lead to serious consequences."
Posted by DH at 8:31 AM