PETA Killing Animals, Britain's Food Police, Al Sharpton's Embarrassment, and Al Franken's Getting Caught in Another Financial Scandal ----
Here's some interesting news tidbits for you to mull over during your midweek melancholy. I'm not saying you'll find them inspirational or even cheery...just interesting.

* For instance, here's a reminder of how the tedious details of life can bug even the great ones. It's a New York Post story of how the Rev. Al Sharpton emerged from a momentous meeting in Queens yesterday with Rep. John Conyers (Democrat from Michigan) only to discover that his 2007 Jaguar had been hauled away by a city tow truck. It seems that Sharpton (whose meeting with Conyers had been about punishing New York City cops over a recent court decision he didn't like) owed $900 in tickets.

* Over here is a Newsweek report of a growing split among the animal rights bunch. The issue is killing unwanted animals. Some, like lawyer Nathan Winograd, author of "Redemption: The Myth of Pet Overpopulation and the No Kill Revolution in America," argues that "over-population is a myth. With better outreach and public relations, we can find homes for virtually all of the healthy animals we are now killing."

Nice attitude? Well, you may be surprised to learn that it runs absolutely against the philosophy of People for the Ethical Treatment of Animals (PETA). Writes Newsweek, "The organization has practiced euthanasia for years. Since 1998 PETA has killed more than 17,000 animals, nearly 85 percent of all those it has rescued." You can understand, however, that although PETA is a very strong proponent (and practitioner) of animal euthanasia, that's a little secret that the organization certainly doesn't want publicized. The image, the fund raising...you understand.

* Caroline Stacey, writing for the Times (U.K.), wonders about how things might change for school kids at lunch time after, that is, Britain's "packed lunch police" get on the job.

Ms. Stacey writes, "Hmm, what's it to be? A lentil korma with brown rice and salad, then fruit and a yoghurt for afters, or a High School Musical bag stuffed with crisps and a couple of bars of chocolate? It sounds absurd but in some schools children sitting next to eat other could be eating such contrasting lunches."

Uh huh. You want absurd? Here you go: Alan Johnson, Britain's Health Minister, has suggested that schools begin checking lunch box contents. ("Sorry, miss; you've got a packet of Fritos there. I'm afraid you'll have to come with us.")

The report tells about various efforts used thus far by school bureaucrats to influence (and control) kids' eating habits including banning certain foods altogether, segregating the packed-lunch kids from the school-lunch kids, and giving classes on nutrition (and how to make healthy sandwiches) for parents.

But to officials like Johnson, it won't do. It's time for coercion. As the Times reporter describes, "The School Food Trust, the body set up by the Government to turn round school dinners, suggest drawing up a policy for packed lunches - a few basic rules to bring them in line with a healthier school environment - and make sticking to it part of a code that parents have to agree to." 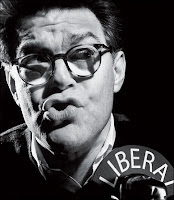 * And finally, here's a brief report of the unfunny, viciously arrogant, and ultra-liberal Al Franken who is a Democrat candidate for a Minnesota seat in the U.S. Senate. But little things like this story in the Minneapolis Star-Tribune could prove problematic for Franken. It tells how the comedian finally got round (but only after the press discovered the problem) to paying $70,000 in back taxes and penalties going back to 2003 -- taxes and penalties owed to 17 different states!

But it wasn't his fault, don't you know. Franken is now blaming his accountant. (The accountant, Allen Chanzis, a partner in Wlodinguer Erk & Chanzis, a New York City firm that specializes in the music, film and TV industries, has served Franken for 18 years.)

All of this, by the way, is extra to the matter of Franken failing for many years to pay a $25,000 penalty to the New York State Workers' Compensation Board. That penalty was levied on Franken for breaking the law three years running (2002 to 2005) by failing to carry workers' compensation insurance for employees of his corporation, Alan Franken Inc.

But in spite of these heralded problems with money and taxes, Franken has repeatedly said he will not release his income tax returns for the years in question. Hmm. Perhaps what's in those returns would create even more political trouble for the guy.

Interestingly enough, the liberal Star-Tribune describes Franken in its news story as being the front-runner in the race. However, Power Line points out that the latest Rasmussen poll puts Norm Coleman ahead of Franken by seven points.
Posted by DH at 8:39 AM