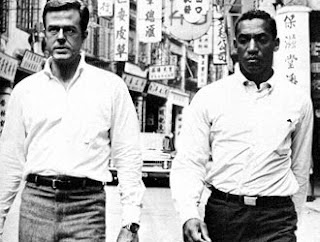 Claire and I are often described as "nostalgic" because our entertainment choices are heavy on old music, old movies, old radio programs, and old books. We're certainly not hiding from the world -- our 26 years of service with Vital Signs Ministries, my travels around the world, even the daily engagement with the edgy issues I have to deal with on this blog -- prove that.

But when it comes to entertainment (and yes, the more idyllic, spiritual functions art can perform), we generally look to the past. Yes, we do carry season tickets to the Omaha Symphony but I guess that hardly makes us modern. After all, the composers whose works they perform are almost always dead and gone. And even when we attend the symphony's Pops series, it's for acts like the Glenn Miller Band, Frankie Valli and the Four Seasons, the Benny Goodman Orchestra, and the Beach Boys.

Come to think of it, we're not even current about TV! The only television programs I've watched in the last several months (besides sports and the occasional Wheel of Fortune) have been DVD copies (obtained from the internet and the public library) of Have Gun, Will Travel, I Spy; Ozzie and Harriet; and Naked City.

But the label of "nostalgia" (often used as a pejorative) doesn't suggest why we prefer entertainment from a different era. The answer to that is, quite simply, quality. In intelligence, creative talent, wholesomeness, beauty, and moral purpose, the artistic productions of previous decades (with very few exceptions) soar far above those being sold to the public today. So why make do? Why compromise? And why should we deprive our children and grandchildren of higher, healthier, more soulfully crafted art?

Over at Power Line, William Katz, a Hollywood insider who once worked for Johnny Carson and the Tonight Show, shares some very interesting, very moving thoughts about this matter, especially regarding our social obligations to keep America's best art alive for succeeding generations.

Please read the whole article but here is an engaging excerpt:

..We cannot inject talent into young composers. We cannot wave a wand and have them write the beautiful melodies we used to enjoy. We cannot, by law, require film studios to respect America and celebrate its values. What we can do is keep the tradition of greatness alive by preserving and showing our best movies, and playing our greatest songs for young people – in schools, broadcasts and recordings. Maybe, just maybe, some kids in a new generation will realize that memorable movies start with great stories and great characters, not special effects or gimmicks, and that great songs last because they touch us, not because they match a demographic.

Recently, a new, superb production of “South Pacific” opened in New York. It’s sold out. One critic remarked that people lean forward in their seats to hear every word. What are they hearing? They are hearing the sounds of talent, craft, and respect for the listener, and they are hearing things that reach them inside.

And no amount of talk about “cultural change,” “cutting-edge concepts,” or “target audience” can convince me otherwise.
Posted by DH at 10:54 AM