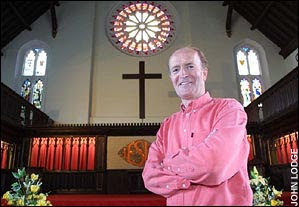 One wonders why we yet talk about the "threats" to free speech or even the "assaults" on free speech when the self-evident facts show that free speech is already being abridged, altered and even arrested altogether.

One of the latest examples is the egregious bullying and censorship directed at London mayoral candidate, Alan Craig, by the BBC and ITV.

It seems that the broadcast executives didn't like what Craig, the Christian Choice candidate, (photo upper left) had to say in his Party Election Broadcasts. Specifically, they didn't appreciate Craig's description of Tablighi Jamaat, the Islamic organization behind the plans for the so-called "Mega" Mosque to be built near the site of London's Olympic stadium. The Tablighi Jamaat is a Muslim missionary sect that has been called by French security services, "an ante-chamber for fundamentalism." Two of the July 7 London suicide bombers are believed to have attended one of its mosques.

What offended the TV execs was Craig's reference to the organization as "separatist," though it most certainly is. But the BBC and ITV still required Craig to either change his text to suit their opinions or be refused his legal airtime.

The change they required was that Craig use the word “controversial” instead of "separatist." But then they decided to go further and insist that Craig could only use the word "controversial" if he applied it the building of the "Mega" Mosque and not of the Tablighi Jamaat itself.

The Christian Legal Centre will be calling for a Judicial Review of the BBC’s and ITV’s decision, and ask the judge to order, as a matter of urgency, the unedited Party Election Broadcast on both channels.

For more details, see this statement by the Christian Legal Centre. (And thanks to both Stuart and Greg for bringing the issue to my attention.)
Posted by DH at 11:21 AM