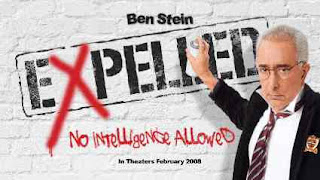 We had an "Expelled" party last Saturday night, a lively conversation shouted over the noise of an equally lively Old Chicago restaurant. And the talk was of Ben Stein's riveting new movie which we had just attended. John and Barb, Matt, Claire and I, Jake, Daniel, Glory and Abraham all believed the film to be an important salvo in not merely the Intelligent Design controversy but in the larger culture war of which it is a part.

And we all recommend "Expelled" to you.

Stein has performed an extraordinary and exemplary service in "Expelled" and I hope many young Americans understand and embrace the message of the film; namely, the incalculable value of intellectual freedom. Sure, the film investigates the arrogance and the closed-mindedness of the Darwinian powers that be and it deftly reveals the wild injustices they've committed against freethinkers.

But the overarching ideal Expelled presents is intellectual freedom. Stein's use of the continuing motif of the Berlin Wall as a metaphor for the tyrant's irrational paranoia set against the yearning of the human spirit for truth was brilliant. As was the whole methodology of the movie. For instance, his use of humorous snippets from old films served not only as entertaining comedic relief but very effective illustrations of his message. His fairness in giving both sides of the ID controversy their time was also superb, particularly so because the best arguments as to why moviegoers' should distrust unadulterated Darwinism frequently came from the Darwinists themselves!

And then the sheer audacity of Ben Stein to connect the dots (not very far separated at that) between the doctrines of Darwin to such movements as human eugenics, Planned Parenthood-style racism, and ultimately the "Final Solution" was daring indeed. But daring only to those who fear political correctness more than they love truth.

Ben Stein, I emphasize again, has made a tremendous, compelling film -- a film that is 1) a highly effective argument for the legitimacy of at least the discussion of Intelligent Design; 2) a powerful, well-crafted defense of intellectual freedom; and 3) a soaring tribute to the sanctity of human life.
Posted by DH at 12:18 PM