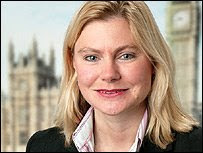 It is but one of many such examples of how governments are "cashing in" on the mania for going green -- even when the actual results in bettering the environment are negligible. Or worse.

Here the Telegraph (U.K.) reports that the enormous "green levy" that the British government will be using to exploit motorists will double car tax revenue to £4 billion. But even as the figures from Treasury itself have shown, this huge tax increase will reduce vehicle emissions by less than 1%.

Justine Greening, a shadow Treasury minister who obtained the figures [photo top right], said last night: "This is a massive tax hike which will have virtually no impact on the environment. Despite their claims, the Government don't expect this move to change behaviour at all - it is just another eco-stealth tax of the worst kind."
Posted by DH at 5:14 AM