"Where Are the Babies?" A Pro-Life Hero in Vietnam Answers the Call. 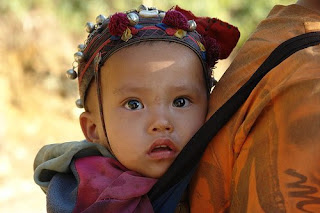 Margie Mason, writing for the Associated Press, has a very compelling story to tell --

Nha Trang, Vietnam -- Sitting cross-legged on a straw mat in the middle of the living room, Tong Phuoc Phuc sings a soothing Vietnamese lullaby. For a moment, his deep voice works magic, and the tiny room crammed with 13 babies is still.

Phuc giggles like a proud papa. He's not related to any of them, but without him, many of these children likely would have been aborted. And to Phuc, abortion is unimaginable.

The 41-year-old Catholic from the coastal town of Nha Trang has opened his door to unwed expectant mothers in a country that logs one of the world's highest abortion rates. In 2006, there were more than 114,000 abortions at state hospitals in Ho Chi Minh City - outnumbering births.

Most pregnant, unmarried Vietnamese women have few options. Abortion is a welcome choice for many who simply cannot afford to care for a baby or are unwilling to risk being disowned by their families.

The communist government calls premarital sex a "social evil." Abortion, however, is legal and performed at nearly every hospital. And unlike in some Western countries where the issue is hotly contested, the practice stirs little debate here.

But shelters for women who want to keep their babies are rare. Phuc promises them food and a roof until they give birth, and then cares for the children until the mothers can afford to take them. In the past four years, he's taken in 60 kids, with about half still living in his two houses.

"Sometimes we have 10 mothers living here ... sleeping on the floor," says Phuc, a thin man with dark, weathered skin and teeth stained brown from years of smoking. "The problem is that a lot of young people live together and have sex, but they have no knowledge about getting pregnant. So they get abortions."

Phuc says he made a deal with God seven years ago when his wife encountered complications while in labor with their son. He vowed that if they were spared, he would find a way to help others. As his wife lay recuperating after the difficult birth, he recalls seeing many pregnant women going into the delivery room but always leaving alone.

"I was wondering, 'where are the babies?'" he says, cradling an infant in each arm. "Then I realized they had abortions."

Phuc, a building contractor, started saving money to buy a craggy plot of land outside town. He then began collecting unwanted fetuses from hospitals and clinics to bury in graves on the property. At first, doctors and neighbors thought he had gone mad. Even his wife questioned spending their savings to build a cemetery for aborted babies.

But he kept on, and now some 7,000 tiny plots dot the shady hillside, many marked with bright red, pink and yellow artificial roses.

"I believe these fetuses have souls," says Phuc, who has two children of his own. "And I don't want them to be wandering souls..."

Here's the rest of Mason's report from the Fresno Bee.
Posted by DH at 9:59 AM