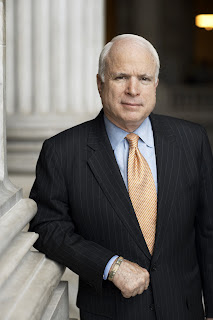 John McCain can't get much coverage by America's mainstream media. After all, they're much too busy with other, more important matters, like swooning over Barack Obama or sniggering over the incessant shenanigans of Hillary Clinton.

But the Russian press is paying attention to the Republican, a lot of attention.

And they aren't happy about what they're reporting.

For instance, note McCain's March 26 speech in Los Angeles in which he said, "We have to strengthen our global alliances as the core of a new global compact, a league of democracies, that can harvest the vast influence of the more than 100 democratic nations around the world to advance our values and defend our shared interests."

That got the Russians' attention. Even more so when McCain added, "We should start by ensuring that the G8, the group of eight highly industrialized states, becomes again a club of leading market democracies. It should include Brazil and India, but exclude Russia."

Why exclude Russia? McCain explained, "Rather than tolerate Russia's nuclear blackmail or cyber-attacks, Western nations should make clear that the solidarity of NATO from the Baltic to the Black Sea is indivisible, and that the organization's doors remain open to all democracies committed to the defense of freedom."

McCain had already angered Kremlin officials when he opined earlier this month that the recent Russian presidential election "would not pass the smell test in any functioning democracy. The people of Russia are going back to the days...where they don't have the right of free elections or even a free society."

Given their previous anxiety, McCain's L.A. speech must really have spilled some borscht.

Again, I offer this news as a public service since Katie Couric and her pals have been preoccupied.
Posted by DH at 10:35 AM