The Cost of an Obama Presidency 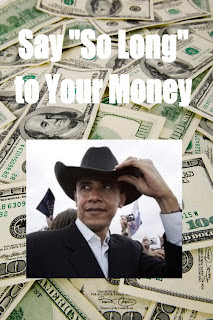 Senator Wayne Allard from my home state of Colorado recently introduced into the Senate budget debate Amendment 4246. In doing so, he has performed a most illuminating service to the American people for he has carefully spelled out the costs of an Obama presidency, something the news media has religiously refrained from talking about.

The figures you'll read below are staggering but they'll be all the more so when it comes time to actually pull the money out of your pockets to pay for them. So, pass the word to your friends and neighbors and let them know that "soaring" isn't just an adjective to describe Barack Obama's oratory; it is more relevant to his free spending promises.

One of my goals for this debate is to fight what I see is an erosion of fiscal discipline in the budget. I think that we need to work harder to tie what is in this budget with what is actually going to be spent by the United States Government.

As a component of that work, I want to add an amendment -- an amendment I intend to vote against, but an amendment that I think needs to be a part of the process – that will budget for some of the rhetoric we are hearing on the campaign trail. Three of these amendments could be offered, but I am just going to do one.

Sen. Obama has offered 188 campaign proposals that would add up to at least $300 billion in new annual spending. That has a 5-year cost of more than $1.4 TRILLION.

Of the 188 new spending proposals, the $300 billion price tag only covers 111 proposals. There are another 77 proposals with unknown cost estimates that will add billions to this number. This new spending, if enacted, would represent an almost 10% increase over the President’s FY 2009 budget.

To put this in perspective, this $300 billion spending proposals would cost more than 42 states’ budgets combined (general fund expenditures). It is more than the United States spent last year on imported oil ($294 billion net). It is more than 60% larger than any one-year federal spending increase, ever.

Who will pay for the proposed $300 billion increase in spending? Middle-class American taxpayers and small businesses (which are the engine of growth for our economy), that’s who. Raising taxes on just the “rich” simply won’t cover it...

The full text of Senator Allard's remarks can be found here.
Posted by DH at 8:54 AM