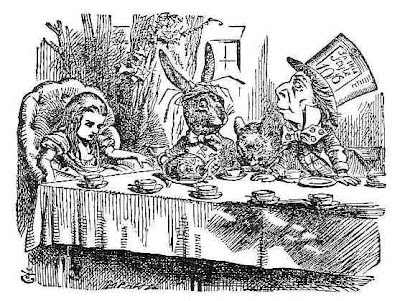 Perhaps Barack Obama is thinking that foreign leaders (including such thugs as Hugo Chavez, Kim Jong II, Alexander Lukashenka, and Raul Castro) will fall over him as much as the American press corps has if he wins the presidency. At least that seems to be the hope behind his plan to to begin a new era in personal diplomacy -- sitting down to talk with America's enemies without preconditions and without proper concerns for how our enemies will manipulate such events.

Obama has been emphasizing this theme, insisting that it is one of the ways he will be dramatically different from other presidents and, of course, different too from both Hillary Clinton and John McCain.

So what does President Bush think about Barack Obama's idea of tea party diplomacy?

...At a news conference where Bush showed unusual passion for a president in his waning months, he said “now is not the time” to talk with Castro.

“What's lost ... by embracing a tyrant who puts his people in prison because of their political beliefs?” he said. “What's lost is, it'll send the wrong message. It'll send a discouraging message to those who wonder whether America will continue to work for the freedom of prisoners. It'll give great status to those ... who have suppressed human rights and human dignity.

“The idea of embracing a leader who's done this, without any attempt on his part to ... release prisoners and free their society, would be counterproductive and send the wrong signal.”

Warming to the subject, Bush continued: “Sitting down at the table, having your picture taken with a tyrant such as Raul Castro, for example, lends the status of the office and the status of our country to him. He gains a lot from it by saying, 'Look at me. I'm now recognized by the president of the United States.'”
Posted by DH at 8:18 AM