Since the Surge: The Successes in Iraq We're Not Hearing About 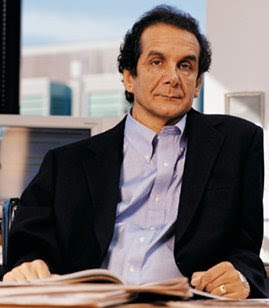 In this revelatory column, Charles Krauthammer describes how Democrat politicos remain stubbornly in denial over the successes achieved in the Iraqi war. In the process, he gives readers a quick review of the notable events in Iraq that have come about since the surge --- remarkable events that we should have been hearing a lot about from American media, but haven't.

"No one can spend some 10 days visiting the battlefields in Iraq without seeing major progress in every area. ... If the U.S. provides sustained support to the Iraqi government in security, governance, and development there is now a very real chance that Iraq will emerge as a secure and stable state." (Anthony Cordesman, "The Situation in Iraq: A Briefing from the Battlefield," Feb. 13, 2008)

This from a man who was a severe critic of the postwar occupation of Iraq and who, as author Peter Wehner points out, is no wide-eyed optimist. In fact, in May 2006 Cordesman had written that "no one can argue that the prospects for stability in Iraq are good." Now, however, there is simply no denying the remarkable improvements in Iraq since the surge began a year ago.

Unless you're a Democrat. As Joe Lieberman, I-Conn., put it, "Democrats have remained emotionally invested in a narrative of defeat and retreat in Iraq."...

Despite all the progress military and political, the Democrats remain unwavering in their commitment to withdrawal on an artificial timetable that inherently jeopardizes our "very real chance that Iraq will emerge as a secure and stable state."

Why? Imagine the transformative effects in the region and indeed in the entire Muslim world, of achieving a secure and stable Iraq, friendly to the United States and victorious over al-Qaeda.

Are the Democrats so intent on denying George Bush retroactive vindication for a war they insist is his that they would deny their own country a now achievable victory?

The rest of this stimulating article is here.
Posted by DH at 9:38 AM